As the date of the UN climate change negotiations meeting in Paris draws near, there’s a steady stream of increasingly alarming reports about the likely impacts of climate change, only slightly mitigated by the increasing number of pledges of mostly inadequate action.

Although the solutions are clear and attractive, it’s easy to feel gloomy because we’re making such slow progress towards adopting them and the consequences seem so dire.

One ray of hope however, is that there’s an unnoticed ‘demand revolution’ happening, which is quietly but dramatically changing the energy needed to live a happy and fulfilled life, and carbon emissions produced as a result.

This is quietly having a big effect. 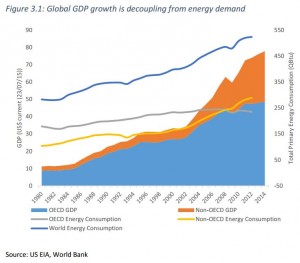 Even though GDP is still rising in the OECD, energy demand has flatlined, primarily because of improvements in energy efficiency. This is now so cost effective, that the IEA suggested that it should be considered as the “first fuel” because the cost of saving energy is typically one third to one quarter that of generating power.

Energy demand is still increasing in non OECD countries, particularly China, but even there, the decoupling between GDP and energy use has been happening much faster than anyone expected. For many this is a sign that China is following the OECD countries in undergoing a transition to a service economy.

Globally we’re also decarbonising the energy supply system rapidly, because costs of renewables are falling dramatically. Onshore wind is now the cheapest source of power.   With every doubling of production, solar PV costs fall 25%. Unfortunately this process has been slammed into reverse in the UK, but the rest of the world is still moving ahead rapidly.

It now looks as if we’re about to have a “gamechanger” innovation, when the cost of battery storage becomes low enough that the cost of renewable energy plus storage matches grid supply costs. At this point customers may well buy substantially less electricity from utility companies, because they can generate and store their own more cheaply. Technical progress has been much more rapid than analysts expected, so Deutsche Bank now suggests that this point of “battery parity” will be hit by 2020.

Lifestyle changes are also helping to quietly reduce energy demand and carbon emissions, even though we often don’t make the connection.

For example, it’s obvious to anyone in business, that remote working is booming. Clearly this isn’t feasible for everyone, but where it’s appropriate, it’s having real benefits. One survey showed that 25% of staff would accept a salary cut in order to be able to work at home some of the time. Companies benefit too, because they can squeeze more value out of their expensive office space, while staff are more productive. Good collaboration software allows more effective innovation and faster decision making. Companies and staff both significantly reduce their travel costs. As a result, the sector is growing rapidly: it doubled between 2007 and 2011. Virgin Media recently forecast that 60% of office based staff will regularly work from home by 2022.

This all helps reduce carbon emissions, so I find this all very encouraging, and it’s a very exciting time for innovators. However it’s bad news for fossil fuel companies, so they seem to be busy at best ignoring it, and at worst covering it up.

The influential financial analysts, Carbon Tracker, recently produced a huge report exploring this, which concluded that investors need to be careful, because the majority of the world’s fossil fuel companies are producing overly bullish demand forecasts based on improbable assumptions.   As most pension funds have significant investments in the fossil fuel sector, this matters to all of us.

This blinkered mindset is worryingly pervasive.

I recently visited the Science Museum’s to see the Cosmonauts exhibition, which was an inspiring reminder of what we can achieve when we put our minds to it, then popped into the exhibition on climate change and got quite annoyed.   The exhibit is sponsored by Shell and while it makes it clear that climate change is happening and is very largely due to human actions, it has very little on the all the exciting stuff that’s happening to stop it. In contrast, the whole tone of the exhibit seems to be trying to give the impression that any reduction in fossil fuel use would be extremely difficult and an insupportable threat to our way of life. I quite understand why Cambridge’s Dame Mary Archer, the new Chair of the Science Museum plans to update it, and hope she finds a more appropriate partner than Shell.

In the meantime, the rest of us can feel less gloomy by quietly joining in with the ‘demand revolution’ and helping change the world for the better.