I often wonder how much energy is wasted in the UK for no benefit whatsoever.

About a month ago, after we’d had a few plumbing jobs done,  we noticed that our Combie boiler was turning itself on every time we used a cold tap.  Or more precisely,  the boiler turned itself on briefly, a few seconds after we turned a cold tap off.

This seemed very odd, because the whole point of a combie is that it only heats up the hot water when you need it. It was also very annoying, because we try hard to keep our energy usage and carbon emissions to a minimum, and this was clearly  wasting energy. We subsequently estimated that it had increased our summer gas usage by about 10%.

It took a while to work out that the problem is what some plumbers call “bounce”.  Not a bad name,  because  when a customer complains about it, plumbers often blame it on the boiler and boiler engineers say  it’s a plumbing problem. I think it’s probably very common, but once you understand it can be easy to fix.

It happens when air has been trapped in the pipework to the taps (note this is a completely different circuit to the one that heats the radiators). Because the trapped air acts like a bouncy cushion, when a cold tap is turned suddenly off, there’s a shock of water pressure that compresses the cushion of air, which tricks the combie into thinking that the hot tap has turned on. This means that to fix it, ideally you need to find a way to let out the trapped air.

Here are some simple things you can do before you spend money on calling out the professionals.

Start by running the taps, initially gently then increasing to full flow.  You’ll know when air is coming out, because the flow of water will cough and splutter, then when the air’s out from that bit of pipework, the water will flow smoothly. Do this for all the taps, starting at the top of the house.

If this doesn’t fix it, the air may be trapped in a “deadleg”, ie a bit of pipework that no longer ends in a tap.

The next thing to check is whether there are any connections for washing machines or dishwashers that are no longer in use.  These are increasingly common, because whereas a few years ago plumbers would automatically install both a hot and cold feed to a washing machine, these days new washing machines tend to be cold fill only, so the hot feed will probably have been blocked off. Hopefully this will  have been done with a little tap, which makes it very easy to bleed the air out. 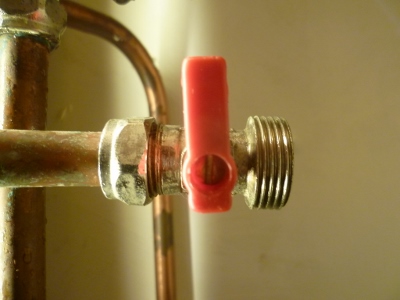 In our case, I found three of these little taps: one for the unused hot feed for our washing machine, and another pair in a cupboard where our washing machine used to be.  Once I’d bled the air out of these, the combie started working perfectly again.

If you’re unlucky, there might be a deadleg that a thoughtless plumber has left somewhere inaccessible, like under your tiled bathroom floor….  If this is the case, don’t despair, because an alternative can be to get a plumber to install a non return valve on the cold feed to the boiler.  It’s not the ideal solution, because the valve may get blocked someday, but with luck this will reduce the bounce effect enough to stop the boiler turning on despite the trapped air.